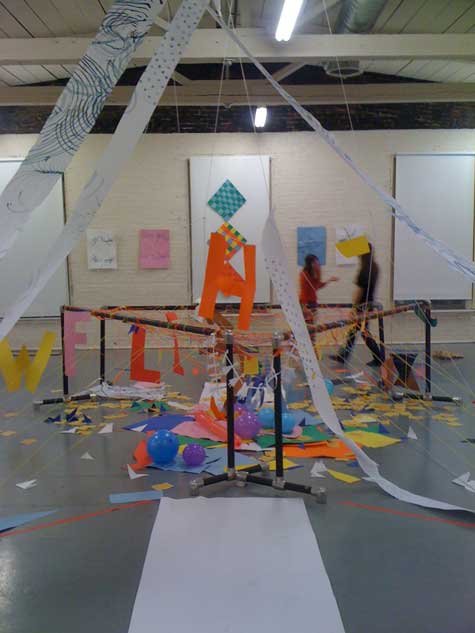 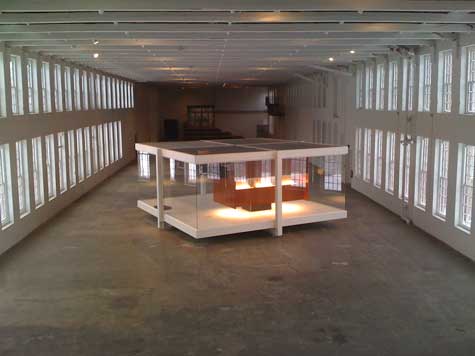 New Year’s Eve Events
Laura K came in from Chicago. Rented a minivan from Park Slope. Scooped up my people. Made pretty good time getting up to North Adams. Frenzy from the beginning. Scramble for beds. Pizza ordered. Beer run. Backed in to someone on the street in front of the liquor store. Not sure how that’s going to pan out. I think it’s the first accident of my life? Everyone arrived and we headed to the Mezze Lodge for our fancy night. Pretty interesting to see about 30 of my friends dressed up in front of a fire place drinking cocktails and being catered to. Are we rich now? Anyhow, it was all very picturesque and there was dinner, then dancing, then more dancing back at the house. Had a headache on Jan 1, but it wasn’t debilitating. Spent the afternoon at MASS MoCA rehearsal space drawing and making the installation. MRO & DMP were very kind to bring us homemade tamales (maybe my favorite food after pizza) from TX. That night after MAFIA we went back to the rehearsal space for the performance. It was very successful. Then improv choreography at the house that night. Jan 2 I was pretty beat and laid low. Jan 3 we got up and went to the museum. Very good art all around, really enjoyed the Guy Ben-Ner videos. Reminded me that Hit Factorie needs to document our activities more. Kind of a bumpy ride home, but after I heard about some of the other cars experiences I think we did pretty well.

Film
World’s Greatest Dad. Fairly good. Robin Williams is not annoying in a sort of indie movie.
Funny People. I really liked it, but it was pretty long.
The Best of Youth. 6 hour Italian miniseries. Follows 2 brothers midlives. Makes you ponder your own existence. Especially if you’re turning 30 soon.
Ali: Fear Eats the Soul. German Fassbinder movie about racism. Sort of a less gross Harold and Maude.
Whatever Works. Woody Allen movie. Entertaining.
Videodrome. Cronenberg movie about reality TV, made before there was reality TV. Debbie Harry is really hot in it.
Opera Jawa. Japanese opera.
Heroes for Sale / Wild Boys of the Road. A double feature of 30s depression era stories. Found them watchable. As usual mostly enjoyed the street scenes.
Goodfellas & The Departed. …