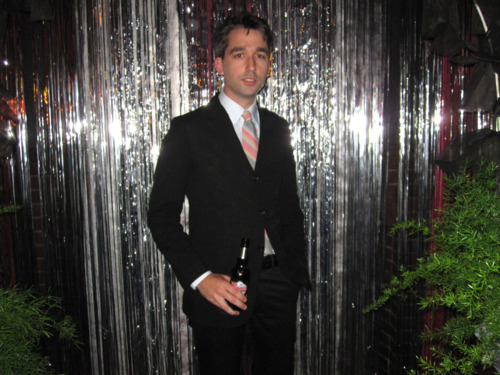 Last weekend was NAMA Prom. I made a poster for it and helped plan it some. It was at the Elk’s Lodge, which was probably the best part. I didn’t know all that many people and everyone else there knew each other. I felt like a chaperone most of the evening. I even prevented a fight. A shirtless man dropped his glasses, while trying to find them he bumped into a very intoxicated young woman. She was very upset and he was very apologetic. She didn’t want to hear his eager apologies and I got in the middle and said to the man holding his glasses “hey guy, please just put on your glasses and walk away, I’ll tell her your sorry, she’s very drunk.” When I was driving home I was inattentive, so I got pulled over and had to do the sobriety test stuff. I wasn’t drunk enough so they let me drive on home. All week I’ve felt worn down and I didn’t even party that hard.

Went and looked at a cabin to live in for the rest of the summer. Found a nice house on a hill for the fall.

Tonight I went to an art lecture and am still really annoyed by it. I have no idea what it was supposed to be about, or what they were trying to talk about, or anything. It was really very much like that snl sketch where the guy reads the newspaper headlines. I really wanted to respond to them and set them straight, but I don’t know what their point was! I wish this could have been explained as being art in itself. But it wasn’t. We were all duped. I googled the characters from the lecture and they had a very thin online presence. I think what they were trying to talk about was artists’ roles as cultural workers. The contexts they were trying to put everything are extinct and they were still talking about it and dwelling on them. Move on you “creative thinkers!” I fell bad for walking out on them, as I’m usually very patient. I gotta give a lecture man.

I’ve been drinking a lot of ginger tea. So good.

One thought on “Prom Night”