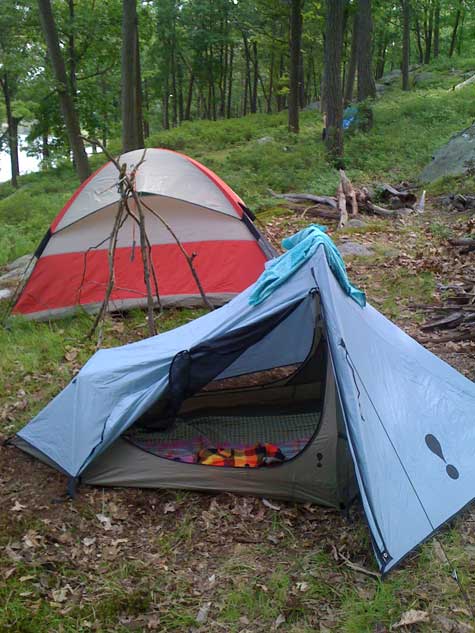 Last weekend a few of us went to suburban New Jersey in honor of my birthday and also Molly’s birthday. We ate, drank, watched tv and played some games. Mostly people were talking. I didn’t wear shoes or leave the house at all.

The prior 2 weekends I went camping up at Harriman State Park. In my opinion, camping is the thing to do this summer. Especially if you have a nice spot. One time I went with up Mike K, another time I went up with Mike K and August. Dave said he was gonna go the second time, but I think he was too afraid of bugs or something and didn’t go. There was also a BBQ at Mary’s on Memorial Day weekend.

I’m 30 years old now. Everyone keeps asking me how that feels. I don’t really know what to say, or why they are asking, as most everyone who asks is 30+ themselves. Uhh.. It feels fantastic! I feel about the same. I do feel less interested in going out and drinking, but I think that might also be a side effect of exercise. I’m still doing P90X, but less intensely. Probably what I’m doing now is just working out like some normal people do. Also, I want to travel less.

Film
A Face in the Crowd — Highly recommend. First movie I’ve watched in a long while that I have really liked.
Lost in America — Sort of funny. But depressed me on account of my birthday. This couple quit their jobs (they seem around 30ish) and sell their house and use their nest egg to buy a RV and travel the country. That’s all well and good, but I have no nest egg so to speak. So I was all hung up on the idea that I pretty much go to work everyday in order to break even in life.
Windy City Heat — Somewhat funny. Interesting, but once I thought about it, was kinda fucked.
Suddenly, Last Summer — One of those older movies that has a lot of yelling.