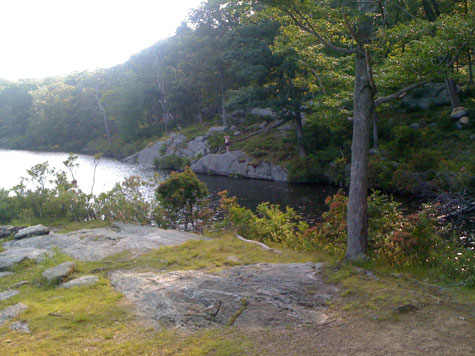 Went camping again at the usual spot the previous weekend. Swam a bit this time. Got in trouble towards the end of the stay by the park ranger fellow. Informed us there was no swimming or camping. Tore down the “no swimming” sign on the way out.

Mom’s Weekend Visit Rundown
Thursday
Plane arrived late. 12:00am arrival. Waiting for her at the top of the stairs. Didn’t show up with the throngs of people. Went downstairs to luggage claim. She was waiting there in wheelchair with attendant. “I was afraid I would get lost.”

Friday
Visited my office — “Awesome.” Showed her the books we’ve made. Pointing to a photograph: “you drew that?” Yeah, I guess so mom. Went to Governor’s Island for a picnic. Mom, we’re going to ride on a boat to the park. We get off the ferry, “when are we going to ride on the boat?” Did not want to eat an avocado sandwich because avocados look weird. Ate pizza at Carmine’s for dinner. That was pretty good. Met some of my good peoples at Harefield Road. KR introduced her to the delicious mixture of vodka + tonic. Home by 9pm.

Saturday
Went to Diner. Everything was excellent. Thankfully it was unusually uncrowded that day thanks to the World Cup. Was treated very well by our as-standard-per-Diner-cute waitress. Molly gave my mom a pretty big hug on the way out. Went to a Staten Island Yankees game that night. Probably asked me who was playing about ten times. Asked the guy in the next seat once for verification. Hot dogs, beers, peanuts, Cracker Jacks. No complaints there. Was plans to get another vodka and tonic that night, but it became too late in the evening.

Sunday
Went to church in Williamsburg. Very boring. I don’t think I saw more than 3 people actively paying attention. The cathedral is pretty and I daydreamed about someone playing ‘Great Balls of Fire’ on the massive organ in there. That entertained me for about 2 minutes. Then I slyly played with my phone the remainder of the mass. Went to see an old movie at Film Forum and just barely missed the Gay Pride parade madness. There were a bunch of barely dressed people in rainbow swimsuits on the train and a pretty convincing trans gal on there, but I don’t think my mom noticed anything. Dinner at Pepe Rosso!
Was super hot and muggy. Had a little longer than usual walk to the subway and I think mom was pretty much out of gas at that point.

Monday
Went to the airport. Delta terminal at Laguardia is a complete mess. I feel bad for the TSA employees assigned there. Just a real bad layout in there.

Film
The Squid and the Whale — Not sure why I’d never seen this. Really enjoyed it. Nearly every minute.
Raw Deal — 1948. At the end of the movie, this old feller in the theater clapped and said pretty loudly “now that’s classic film noir!” I agreed.
The Wrestler — I thought Rocky was better.