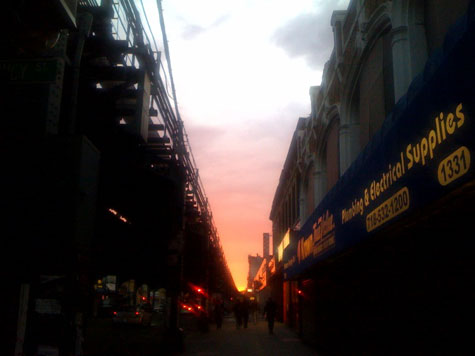 This last weekend I went camping. One night solo and then a bunch of people came up for Saturday night. I like camping. I am pretty happy with my set-up too. Everything is light and compact. I think I may look into a mattress pad or blow up mattress thing next. The weather was real nice, and I did a fair amount of swimming in the forbidden lake, as well as a few swings on the rope.

I went to No Lights No Lycra last week.

The previous weekend I partied; Poker with Gino, a rock show in a woodworking shop, and a party on Emily’s roof in honor of Miranda going off to grad school.

The weekend before that I went to the beach with Esha.

Film
Life During Wartime — by the guy who made Happiness and Palindromes, and some other movies I haven’t seen. Weird. I liked it enough.
Pope of Greenwich Village — just some goofball italian dudes in the old neighborhood.
Home — French or Swiss or SwissFrench movie about these folks that live in a house near an abandoned highway.
Youth in Revolt — even though everyone’s supposed to be over Michael Cera, I found this movie entertaining.
The Lost Weekend — An oldie about an alcoholic writer.
McCabe & Mrs. Miller — Western. The thing that really struck me was the main characters drink of choice — whiskey with a raw egg cracked into it.
The Red Shoes — I turned it off, I don’t see what all the fuss is about?