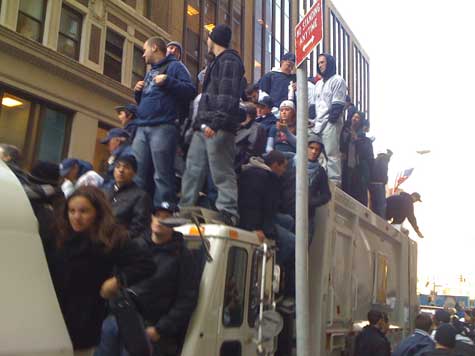 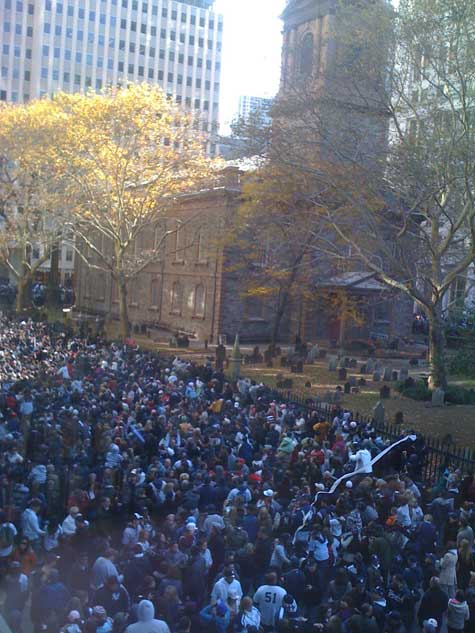 Baseball fans. 11:00am. Bud Light tall boys galore. Took me about 45 min to walk the 3 or 4 blocks to work, and it involved some underground maneuvering. I kept thinking — “wow, look at all these people gathered here, what if it was for something that actually affected their lives?”

If Only Voters Were as Diligent as Sports Fans

Whenever I hear sports fans on talk radio or personally chat with people about sports both Spectator and participatory games the depth and breadth of the conversations are not surprising. As a teenager fan, I knew the batting averages of half the players in the American League. It is the American way.

This mental diligence does not carry over, by and large, into their role as voters. Compare the differences.

1. Sports fans do their homework. They know the statistics of the players and teams are deeply involved in analyzing strategies and tactics on the playing filed. To them the game is a study not a hunch or knee jerk reaction. The looks, smiles, big salaries and rhetoric of the players mean nothing unless they are based on performance. Fans also look forward, thinking about foreseeing and forestalling their opposing team’s adjustments and responses.

2. Fans hold the hierarchy responsible from the players to referees (umpires), to the coaches, managers and owners.

Voters, on the other hand, have allowed top down forms of no-fault government. This is true even when votes are not properly counted or elections are stolen. Presidents, Governors and Senators, Representatives are rarely held accountable for their most series boondoggles, failures or wrongheaded policies. Smiles and rhetoric go a long way on the likeability index in contrast to studying their actual voting records. Voting records recede into the dark mists while the propaganda materials of the politicians shine in the bright lights.

3. Fans analyze reasons for defeat or victory not just on what happened in the ninth inning or in the last two minutes of the final quarter. They understand that the seeds of winning or losing are planted throughout the game.

Voters just look at the final voting count at the end of Election Day. As a result, they miss the dynamics before elections to understand what were the influential factors. Focusing on the latter had led some scholars to conclude that Al Gore cost me more votes than I cost Al Gore in the 2000 election.

4. Fans evaluate the dual performance of the teams offensive and defensive. They know that both who made it happen and who let it happen are keys to grasping the game. They know when a team beats itself.

:Voters almost always focus on which Party or elected officials proposed a policy or a nomination. Rarely do they criticize their favorite Party for not stopping bad bills or judicial nominees.

5. Fans understand that chronically losing teams need different players and managers. Beyond just booing loudly at their home team, they have many specific ideas about replacements and which positions need fresh talent.

Voters, many of whom are on automatic because they are hereditary Republicans or hereditary Democrats, seem resigned to the same field year after year. After ten years of losses to the Republicans at the local, state and federal level, Democratic voters still meekly go to the polls sensing they are voting for the least worst choices. Instead of asking “why not the best?” voters too often appear resigned, not demanding a new game plan, new players and managers.

6. Sports fans complain loudly, and engage in robust arguments with opposing fans. They have a long memory. I know because my small Connecticut home town was split down the middle Red Sox fans on one side and Yankee fans on the other. The Red Sox fans never let us forget that their team gave the Yankees their best early players, including Babe Ruth.

Except for one or two fervent issues, voters tend to give politicians a free ride about dozens of other positions that may affect them adversely in their daily lives and dreams of a better future for their children. Single-issue voters are easily captured by politicians who support them on that issue and are allowed to escape accountability for dozens of other subjects.

7. Fans are never satisfied observe Yankee fans for example but voters settle for very little and let their expectation levels run down year by year. Their cynicism makes them say that they’re not turned onto politics which is why politics has been turning onto them very disagreeably. And the golden rule of this brand of politics becomes “he who has the gold rules.”

One thing is for certain. If fans were as serious about politics as they are about sports they, as taxpayers, would not be paying for stadiums and arenas that should be paid for by private capitalists and the wealthy owners of professional sports teams.