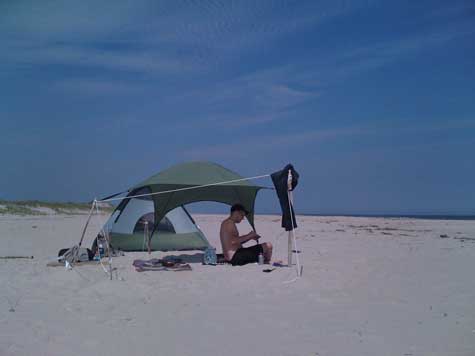 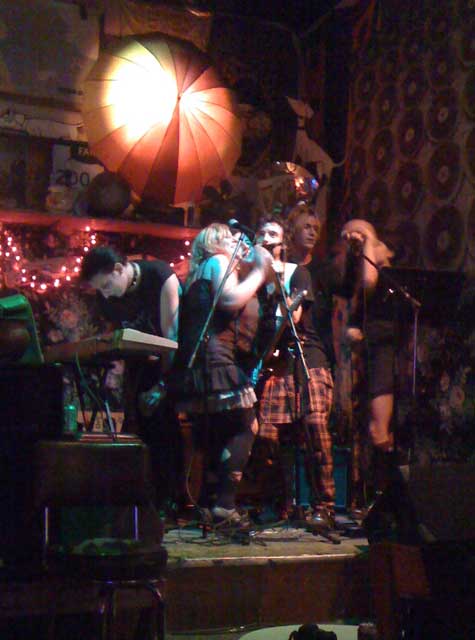 Went to the 2 L train Bushwick bars last Wed with Jeff. Thursday went to the going away party for Marilynn at E. River Bar.

Friday afternoon we hatched a camping plan based on blog friend of friend Cold Splinters. That night it rained and I went to bed early.

Saturday we hauled our gear to the J, then the LIRR, then a ferry. Then walked about 1.5 miles down the beach, past the beach goers and the few other campers. We set up an impressive camp site fairly quickly. Then did some full-throttle chilling out. Made a nice dinner using a mix of our farm shares then did a lot of star gazing. Woke up pretty early on Sunday, made breakfast. Lazed around some more. Mike and Aug did some exercising and I read magazines. Packed up and trekked back. All an in all a pretty successful stay-cation. (more pics) When I got back that night I had designs on riding my bike around, but I immediately fell asleep as soon as I laid down on my bed.

Last night I popped in to pick up my new hand-me-down blender from Jenny and ended up lingering around and eating dinner. There was some frustration with the chicken, but I didn’t mind. I like hanging out in the kitchen. On the ride home I decided I should get a beer, so I stopped at GBM and watched these kids with outfits off the racks from St. Marks get on stage. I wish it was a parody or comedy act, but it was for real. The gist — took an amazingly long time carefully setting up. The actual music was all pre-programmed on the synth with the occasional bang of the keyboard. I am not sure the guitar was plugged in, or turned up, cause I couldn’t hear it. This third guy had some sort of electronic device, but I am not sure what he was doing. The best song was one where they just screamed. There were a lot of bad ones, including some kind of sad lullaby and an embarrassing cover of Bone Machine. The best thing they did was sing happy birthday in between every song. Meanwhile their posse was loving every minute and never put down their digital cameras. I would like to hang out and observe these people some more.

Film
The Day of the Locust — 1975 film about 1930s Hollywood. I’m not sure if it was good. There were pretty good parts, but sometimes it wasn’t so great. Could have been edited into an entirely different movie. I haven’t seen much of Karen Black’s work, but I am guessing this is Karen Black at her best (which is only pretty good).

Baby Doll — Racy movie considering it was made in 1956. I didn’t like it at first, but then liked it when it was all over.